Boost Your Immunity with Potassium Broth 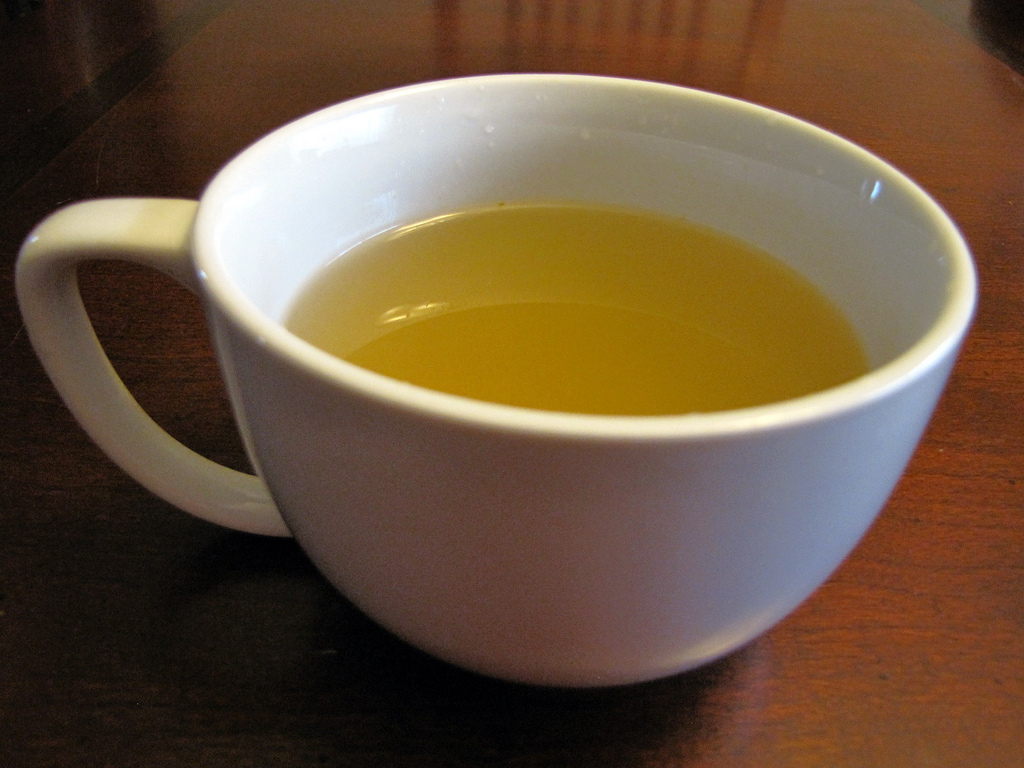 This weekend I had the pleasure of teaching an Immunity Boosting Through Food class at the amazing Herb Shoppe Pharmacy on Mississippi Ave here in Portland.  Valerie Roth, another Certified Holistic Nutritionist, and I taught 7 women how to make potassium broth, fire cider and an immunity boosting tea.  There was lots of chopping and tasting and discussion during the two hours of learning.

I was responsible for teaching the section on Potassium Broth, an amazing elixir to nourish your immune system.  Potassium broth is an easy method for increasing the potassium in your diet.  It can be used as a daily tonic to prevent cold and flus during the winter or if someone has already become sick, you can use it to nourish them back to health.  It is a great recovery drink after strenuous exercise, child birth or a bout with a stomach virus.

Potassium, calcium, magnesium, sodium and chloride are all necessary electrolytes. Potassium and sodium perform many of the same body functions, such as muscle contraction and fluid balance. However, they usually work in opposite directions. For example, sodium draws fluid out of the cells, increasing blood pressure, while potassium draws fluid into the cells, decreasing blood pressure.  These two minerals work together to balance fluid in your body.  Sodium intake can affect potassium excretion from the body, and conversely, potassium intake can affect sodium excretion. An increased intake of one mineral will result in an increased excretion of the other mineral.

Your body needs both potassium and sodium to function properly. As long as you consume adequate quantities of each mineral, your body should be able to balance them according to your needs.  Unfortunately, the Standard American Diet, with its heavy reliance on processed, over salted food, leads to potassium deficiencies for many Americans. The recommended intake of sodium is 2,300 milligrams per day, which is generally very easy to achieve with the average Western diet.   Unfortunately, this high intake of sodium can effect your bodies potassium levels.  Your body can’t make potassium, so it must be obtained from foods like greens, lentils, lima beans, prunes,  sweet potatoes, mushrooms, carrots, parsley, russet potatoes, avocados and soy beans.   Your body needs almost 5 grams of potassium a grams per day to function properly.  Along with the electrolytes sodium and calcium, potassium helps your body regulate your heart rhythm, blood pressure, water balance, digestion, nerve impulses, muscle contractions and pH balance.  A deficiency in potassium can cause muscle weakness, muscle twitching,  high blood pressure and cramping. 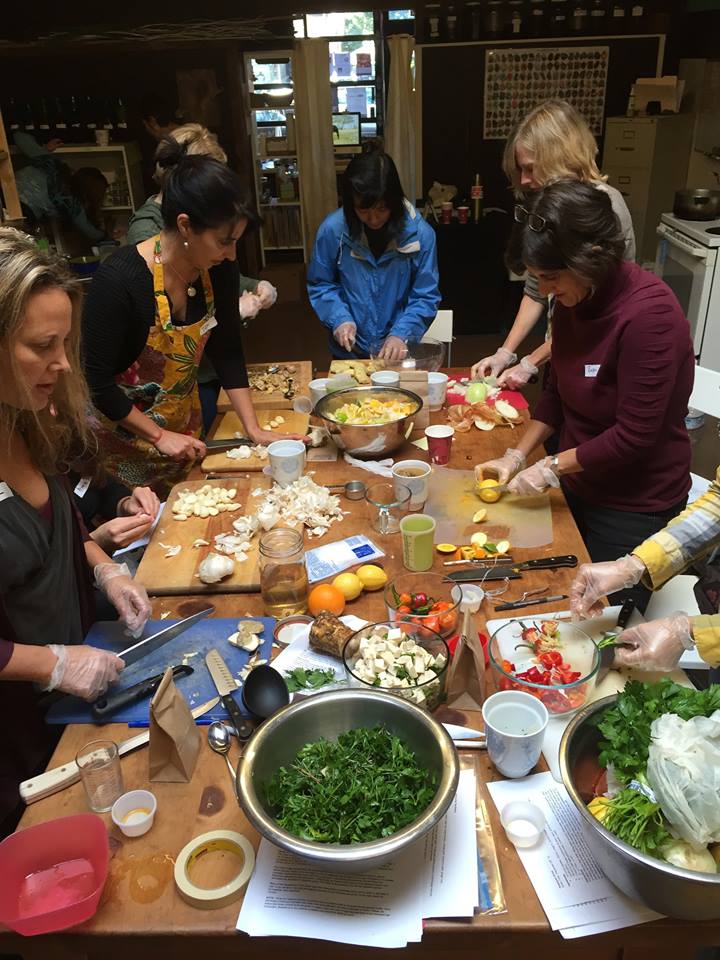 Potassium broth is a very versatile food.    Since so many vegetables are such a good source of potassium, there are many options and flavor profiles you can try to achieve the taste you want.  Don’t be afraid to experiment to see what tastes best for you.  Also, to create a hardy soup, you can puree the vegetable solids in the liquid instead of discarding them and then eat it as a meal.

The broth also can be used for many different purposes. I have used it to cook hot mixed grain cereal in the morning, to cook rice, beans, lentils and other grains, as a base for soups or stews and to cook vegetables.  I sometimes even drink it by itself after a hard work out for hydration. The possibilities are endless.

Part III of Introducing Solids to Babies: What to Feed Your Infant 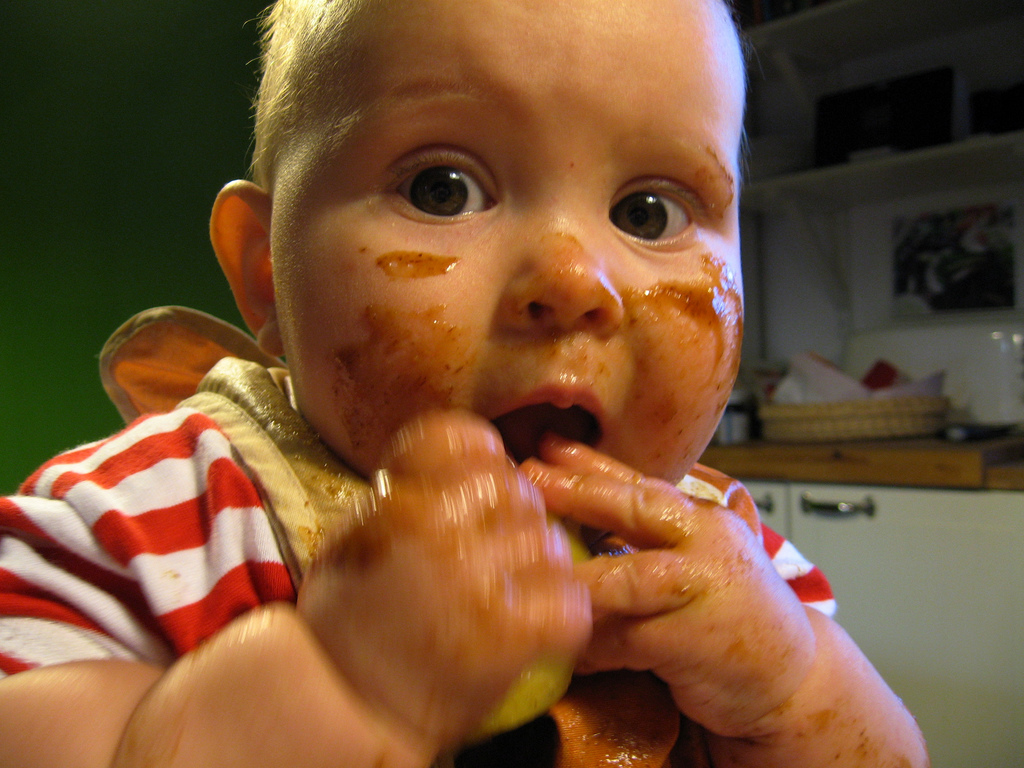 Now that you have determined your baby is ready for solids and you have decided how you want to feed your child, the all important question of what to feed them becomes relevant.

In the recent past, iron fortified rice cereal was often the recommended first food for babies.  This recommendation has started to come under question. Rice and other cereals are a heavily processed food with most of the nutrients stripped out.  Rice cereal, in particular, has recently been called into question due to the presence of arsenic in some rice (AAP, 2003).  There is also some question about a baby’s ability to digest grains due to a lack of pancreatic amylase, the enzyme needed to breakdown carbohydrates.  A baby doesn’t have full pancreatic amylase production until the age of 28 months (Dessinger, 2011).  However, breast milk is a rich source of alpha amylase, offering breastfed babies added digestive help (Lindberg, 1982).  This amylase is unique because it has a broad range for pH tolerances.  This broad range helps the amylase survive the low pH of the stomach and helps digest carbohydrates in the small intestine. Babies also have two other enzymes in their small intestines, sucrase-isomaltase and glucoamylase, which aid in the digestion of carbohydrates (Harrison, 2012).

One more factor to consider in the introduction of grains is the timing of adding them to your baby’s diet.  In 2012, Norris et al conducted a study looking at the relationship between the time of first gluten exposure to the development of celiac disease.  They found that babies fed barley, rye or wheat cereal in the first three months of life had a 5 fold increase in the development of celiac disease over children whose first exposure was between 4-6 months of age.  Children who were not exposed to gluten until the seventh month, had a marginally higher rate of celiac then those children exposed between four and six months.  A similar study looked at time of first wheat exposure and the development of a wheat allergy.  Pool et al  (2006) found similar results about the timing of first exposure.  Both of these studies point to a sweet spot of four to six months of age for first time gluten exposure to decrease the risk of celiac disease or wheat allergy.

Adding grains to your infant’s diet will need to be a personal choice.  If you do decide to introduce them at this time, do not make them the main component of your child’s meals. Vegetables, meat and fruits should be the main course with cereal as a small addition.  Remember an infant’s stomach is only as big as his/her fist.  Adjust your portion size accordingly.   Avoid processed baby cereal.  You can make your own cereal gruel with properly prepared, soaked and sprouted grains such as oats, spelt, rye or barley (Fallon, 2013).  Sally Fallon is an excellent resource for properly preparing grains.

Good first foods for babies include avocado, green beans, squash, egg yolks, carrots, pumpkin, banana, bone broth, sweet potato, shaved organic liver, and pureed meats.  Small amounts of unsweetened goat or sheep’s milk yogurt and fish eggs can also be good additions to an infant’s diet.  If at all possible these foods should be organic and/or grass fed.  Fruits and vegetables should be soft cooked and consist of only one ingredient.   Introduce only one new food every few days so if your child has an allergic reaction you can pinpoint the culprit (Sears, 2013).  If after a couple of days of eating a new food you see no reaction, then you can add another new food.  Signs of an allergic reaction include:

Allergic reactions can escalate quickly.  If your child is having difficulty breathing, having severe diarrhea and/or vomiting or is experiencing swelling of the face or tongue, call 911 immediately.

Before sitting down to a meal of solid foods, allow your infant to breast-feed or bottle feed first so they are not starving when they sit down and become frustrated with getting the food to their mouths.  As your child becomes more adept at eating solids, you can continue to introduce new tastes, textures and smells. The goal is to get your child to eat the same food you are eating.   If your child refuses a food at first, reintroduce it at a later date.  It often takes a baby multiple exposures to a particular food or texture before he/she likes it (Satter, 2000). Now is not the time to restrict healthy fat.  Fat from fish, avocados, fish oil, breast milk and other healthy sources are necessary for brain development and vitamin absorption (Sears, 2013).

(For references see first article in the series.)

Photo by Sami Keinanen on Flickr under the Creative Commons license.

This post shared with Homespun Oasis and The Nourishing Gourmet.